I’m typing with one hand since other is clasped around a hot cup of coffee to keep me warm. It’s day 5 with no heating or hot water but the good news is the boiler is getting replaced today. It’s a 3 day job so I don’t think we’ll have anything tonight, but there is an end to this and that is the main thing. If it had gone on any longer it would be hotel relocation time! As much as I love autumn I’ve now realised I only love it when I have heating!

Taking of which, this morning I wanted to yabber about tablescapes, more specifically Fall tablescapes. Now you don’t have to make the display on your console or table seasonal at all. I tend to because it gives me a bit of variety, as I don’t really replace the big stuff much. So in order not to get bored with the same old look I tend to play around with the accessories a bit more, mostly flowers actually as they are one of the most transformative.

Tablescapes (a word used a lot more across the pond than here) are creatively designed table arrangements or centerpieces.  I’m not just talking dining tables I’m talking all tables; occasional, coffee, consoles, shelves and mantles even.

There are some of tricks of the trade (aren’t there always?) when it comes to designing them so here goes. 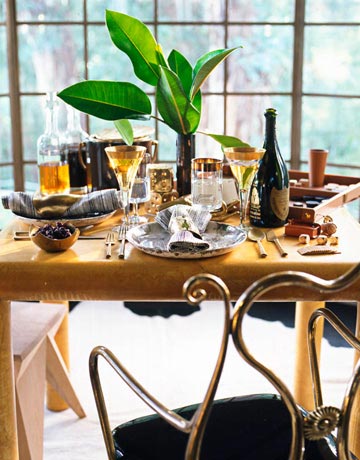 I actually mean more an idea than a theme. Lets say for example that I want a seasonal theme for the Fall; I will collect items that relate to it. So sparkling things like t-lights and small vases that bounce the light around, some autumnal foliage, little bowls of the most amazing pot pouri on earth (yes pot pouri!). Honestly, this is like no other. I bang on about it constantly but if you’ve missed me doing that it is by Santa Maria Novella. It scents the house with this magical deep mystical smell a bit like being caught in a  forest in Italy in the rain. Your theme doesn’t have to be seasonal of course, it could be based around a colour palette, or certain texture – the possibilities are endless. Don’t worry about matching the objects, I would say it’s much better if they harmonise and complement each other rather than match completely.

You don’t want everything on one level otherwise it will read as a big yawn, especially if you have a great long table.  Juggle up the height. I’ve said it before but I’m saying it again, try and not leave gaps between objects (boring) instead criss cross, butt up and intersect your accessories.

I like my tablescape to blend into the overhaul scheme. I didn’t use to, but now I do. I think since I’ve painted the house out in my own range which is darker than I’ve ever gone before the colours are a statement in themselves as they have such depth. So no longer do they just hang out as background hues they are actually making a statement of their own. So in a weird way I’ve had to restrain the ‘statement worthy’ accessories as fundamentally I want to create a space that is sophisticated and glam, not punchy and a little bonkers! Now I’ll make sure the pieces I accessorize with echo the palate of the room. That is not to say I won’t inject the odd punch but it will be subtle and beautiful not crazy.

On every table in this house you will find either little posies of flowers or succulents of the faux variety of course. I like ‘scapes’ that don’t feel perfect so these guys help me loosen up the feel big time and its through them that I add my drama!

Add a bit of fantasy

Table settings in my book should read as beautiful, dramatic and inviting all at the same time. Pops of metallic and candlelight help knock this out of the park. All I need now is some heating and I’ll be embracing fall with full on gusto.